The capital of Japan, Tokyo is Japan's largest major economic zone. It is an enormous market with various and advanced needs and is home to companies in all types of industries and businesses, as well as universities and research institutions. As a hub of information and international business exchange, the environment that Tokyo provides is a source of new industrial vitality.

In preparation for the 2020 Tokyo Olympics, financial resources, human resources, and companies from around the world are expected to assemble in Tokyo, transforming it even further into a city that is open to the world. You can expect a number of business opportunities in Tokyo. Here are some of the advantages to this location.

People and offices are concentrated in Tokyo

Tokyo has a population of about 14 million, which exceeds about 10% of Japan’s total population. If commuters living in other prefectures who come to Tokyo for work or study are included, Tokyo's midday population exceeds about 16.00 million. ＜table 1＞

In terms of Tokyo's national share by industry, the "Information and Communications Industry" holds the top spot at 34.1%. Next in line are the "Academic Research, Professional, and Technical Service Industry" with 18.8% and the "Real Estate and Leasing Industry" with 16.1%.＜table 3＞

Furthermore, with its concentration of financial institutions, Tokyo can be considered a suitable environment for companies' economic activities. 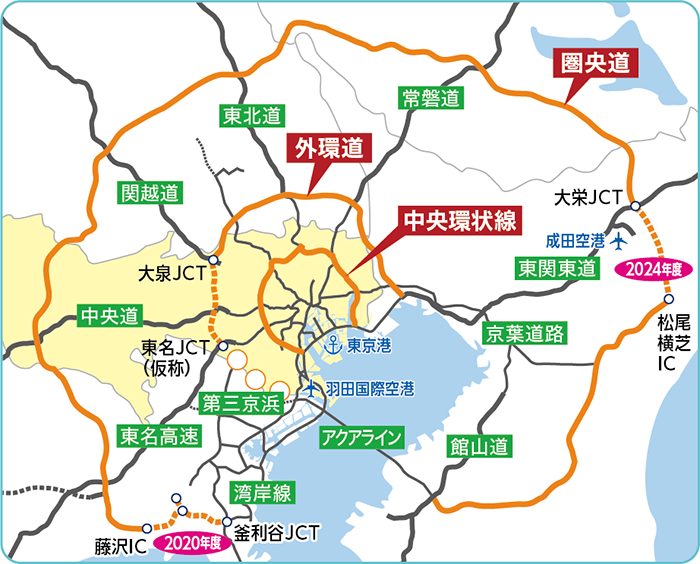 Haneda Airport, located in southern Tokyo, completed its fourth runway in 2010. It opened a new international passenger terminal and is expanding its functionality as an international airport. Travelers using the airport, both domestic and international, have increased dramatically.

By the end of March 2014, its capacity increased to 447,000 arrivals/departures per year (of which 90,000 were international). There are efforts to develop Haneda Airport into a 24-hour international hub, focusing on the infrastructure development and earthquake proofing necessary to strengthen this metropolitan airport.

The Ken-O Expressway (or Metropolitan Inter-City Expressway) is a high-quality expressway planned to surround the city at a radius of 40 km - 60 km and extend 300 km in length. With the opening of the Sagamihara-Aikawa Interchange - Takaosan Interchange segment in June 2014, the Tomei, Chuo, and Kanetsu Expressways became linked, further improving access to the entirety of Japan.

With the completion of the three ring roads - the Ken-O Expressway, Gaikan Expressway, and Central Circular Route - it is expected that congestion will be eliminated, the logistics network will be enhanced, establishment of companies in areas along these roads will be promoted, and the region will be revitalized.

Furthermore, in March 2015, the Central Circular Route opened completely, adding to the 13 radial roads and 2 ring roads that compose the Shuto Expressway System, alleviating traffic congestion, and improving access. It is also attracting attention for its disaster prevention measures and environmental improvements.

Compared to cities in other countries, Tokyo's railway system is quite advanced with respect to route density and railway network composition. Furthermore, the ratio of people using the railway among the various transportation methods available is high, so it plays a vital role.

The JR Tokyo Station is an immense terminal linking 18 railway lines, 10 bullet train (Shinkansen) lines, and two subway lines. In March 2015 with the opening of the Hokuriku Shinkansen line between Toyama and Kanazawa, excellent nationwide access was achieved through the combination of the Tokaido/Sanyo Shinkansen, Tohoku Shinkansen, Yamagata Shinkansen and Joetsu Shinkansen.

The Port of Tokyo

The Port of Tokyo has actively established state-of-the-art port facilities to meet the needs of modern times, including a commodity-specific piers and ferry piers, and is a logistics and distribution hub not only for the metropolitan area, but for the entire Eastern Japan region.

In addition, development of the business districts and coastal suburbs is progressing to realize the full potential of the Tokyo Bay waterfront.